Split system for 2 rooms: how the equipment is arranged and works + the nuances of choosing such a technique

If you need to cool two rooms, and the place for the outdoor unit is one, the best engineering solution would be a split system for 2 rooms - the equipment is especially important for new high-rise buildings, where parts of the facade, decorated with special baskets, are allocated for air conditioners.

What is the principle of operation of the “double” split, what are the advantages and disadvantages of the circuit, and also how much does a similar system cost? In addition, we identified the main parameters for choosing an air conditioner, described the specifics of its installation and maintenance.

The relevance of a “dual” split system

In the private sector, there is usually no problem installing multiple devices for different rooms. But if the owner does not want to spoil the facade with several bulky boxes, it also makes sense to consider multi-split.

Business class high-rise buildings are equipped with centralized systems, so the issue of air conditioning for a single apartment is removed. In other cases, the installation of HVAC equipment must comply with certain rules.

Dimensions of the installed suspended blocks, for example, channel or cassette systemslimited by the height of the ceilings. A quota has been set for the total energy consumption in the apartment, which regulates the power of the supplied electricity. But most of the rules apply to external blocks.

In Europe, outdoor units have long been mounted on roofs or displayed on the inside of the courtyard, which preserves the aesthetics of the facades

On the facade and on the outside of some buildings, the installation of HVAC equipment is prohibited by law or individual operating regulations. But tenants are offered allocated places for such purposes on the balcony, roof, technical floor, in special niches.

On small sites, square meters is not enough. One apartment is usually allocated only one place measuring about 60 cm by 1.5 m. The most appropriate solution in this case is to install a simplified multi-split system.

The principle of operation of the equipment

What is the difference between this split systems, if you compare it with a conventional air conditioner? A feature is the triple separation of the freon circuit.

First part located in the external unit and consists of a compressor, flow dividers, condenser heat exchanger. The latter has 2 sections.

The compressor is forced to work continuously, even if one external unit is turned on, therefore more reliable elements with a margin of resource (+) are installed in such systems

The other two parts located in indoor units and consist of evaporators and capillary tubes. All participants in the scheme are combined with each other by freon highways.

The operation of this scheme is based on the property of liquids capable of absorbing heat during evaporation, but during condensation, on the contrary, to release it. The agent in refrigeration systems is freon, which circulates in the circuit.

Heat is absorbed by the indoor units and sent to the outside due to the thermodynamics of the transition of the agent from liquid to gas and vice versa.

Hot Freon leaves the compressor under pressure and runs into a separator, where it bifurcates to cool two rooms. Once in the evaporator, Freon has to make the transition to the state of gas. Why does he take heat from room air, which is pumped by a fan.

Then freon is sent to the condenser heat exchanger (also 2 sections), where it is cooled to a liquid state.

Thus, the process of cooling the premises occurs. But the equipment is able to work on heating. In this case, the direction of movement of freon changes.

Features of the operation of air conditioners

It is technically possible to connect up to 7 internal boxes to one external box. There are no clear links between the power of the outdoor unit and the number of indoor ones. One external can work in the company with both two and three internal.

When calculating the circuit, proceed from the total power of all indoor units, which should fit into the range of min and max values ​​of the outdoor cooling capacity (+)

Conventional multi-splits differ from expensive and advanced multi-zone installations by the inability to operate indoor units in a “heat - cold” pair.

They know how to function in only one climatic direction - either everything is cold, or everything is warm. If you turn on the blocks in opposite modes, the equipment will not start.

But you can set different temperatures on each of the devices. But you need to stay within the same regime - either cooling or heating.

We select the installation according to the characteristics

It is believed that a double split system should cost less than two separate devices, but this is not so. Compared to the total price of two units, one double will be 15-30% more expensive, even with the same power. The reason is the invertor principle of operation.

Inverter models use advanced technologies plus all kinds of upgrades that you will not find in conventional devices, which makes the system as a whole more expensive (+)

Non-inverter air conditioners are cheaper and can be equipped with a winter kit. But in the assortment line of manufacturers there are few such equipment due to low demand.

The external unit can be connected to the internal modules of cassette, channel or wall type. Consider when and in which rooms they are used.

Cassette unit not suitable for rooms with low ceilings and / or small area. These models are designed for large commercial premises - offices, restaurants, shops, cinemas.

To install a cassette unit, 25-40 cm of inter-ceiling space is needed, and laying all communications requires high labor costs and sufficient skills of performers

Channel wiring also involves reducing the height of the rooms. This option is the most aesthetic, albeit expensive.

It will be appropriate in a country cottage, but not for two rooms, but for several rooms.You can make a general wiring with one or two external units.

The channel system is ideal if there are increased requirements for the design of the premises and there are no problems with the low height of the ceilings. Only decorative grills remain in the visible part

Wall blocks - The best solution for an ordinary apartment or house with standard ceilings. They are easy to install and do not require large rooms.

External blocks in double split systems are more reliable and the total length of the tracks they have more when compared with conventional.

Indoor units are selected by:

The main functional parameter is the range of outdoor temperatures. It is important that the equipment operates in conditions that are below the maximum permissible. The efficiency of the equipment depends on the atmospheric load.

It is also important to consider the following three parameters:

The disadvantages of the design include the need to install indoor appliances close to each other - in the neighborhood. The distance depends on the length of the track in the selected model.

When calculating the power of one indoor unit, we act like with a conventional air conditioner: we repel from the area of ​​the room and the ceiling height. Then we sum these indicators to get the power of the outdoor unit (+)

There is also a simplified formula: at 10 m2 need about 1000 watts of power. This calculation works for rooms with good thermal insulation. If light enters the room from the south or south-west side, we add another 25% to the indicators.

Detailed instructions for calculating the power of a split are presented in this article.

The most reliable manufacturers traditionally considered Japanese firms Fujitsu, Mitsubishi, Toshiba. They are also the most expensive brands.

Of the models for 2 rooms, you can consider the following:

In assortment lines there are fixed and typesetting systems. The first imply a complete set from the manufacturer. In the second case, you can choose the blocks yourself.

Fixed are convenient if it is supposed to service the same premises (minor deviations are acceptable). Typesetting is relevant in reverse cases with rooms of different sizes

Specificity of installation and operation

If we compare the cost of installing two separate air conditioners and a double split system, the amount will be approximately the same. The reason is a similar length of tracks. The installation price directly depends on the length of interconnects, cable, freon tubes.

During installation, it should be borne in mind that the freon bypass control system requires accurate accounting of the amount of substance for each of the indoor units

When air conditioner installation carried out in conditions of general repair, it is advisable to split the installation of the split system into 2 stages.

First, wall the walls, lay the inter-unit communications, fix the outdoor unit, and do the internal equipment after finishing the premises.

If installation is carried out after repair, freon pipelines are sewn up in special channels. They are not hidden in the walls, but it makes replacement easier if such a need arises in case of breakage or the desire to install more powerful equipment

The outdoor unit on the facade is best placed under the window so that the master has access to it during maintenance.

Operational features of a split system:

Indoor units, regardless of their number, need to be arranged periodic health care.

Mold on the fins of the evaporator and fan turbines halves the performance of the device, contributes to the appearance of an unpleasant odor.

What is multi-split. Block layout. Features of installation work.

Installing the system in 2 stages - before and after repair.

If there is no possibility or desire to install two separate air conditioners, it makes sense to choose a split system for two rooms. Important parameters when choosing - power, temperature range, the length of the freon conduits, elevations between the blocks.

Share with your readers your experience of choosing and using a split system in two rooms. Please leave comments, ask questions about the topic of the article and participate in discussions - the feedback form is located below. 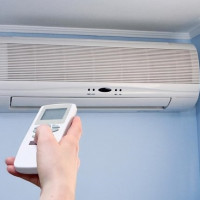 Air conditioning and split system - what is the difference? Differences and selection criteria for climate technology
4 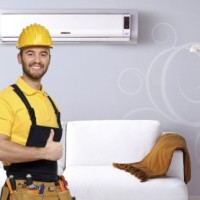 Proper use of split systems: operation of equipment + tips for care
0 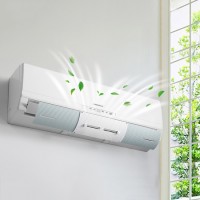 What is a multi split system: principle of operation + installation and connection rules
0 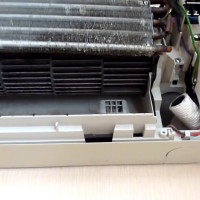 The device of the indoor unit split system: how to disassemble equipment for cleaning and repair
3 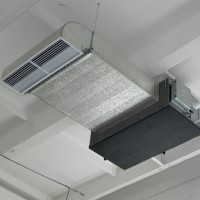 What is a channel split system: varieties and device options
0 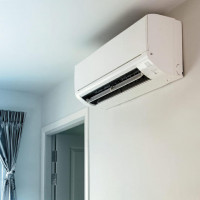 What is a split system: device and principle of operation of typical air conditioning systems
2
Visitors Comments
Add a comment
Click to cancel reply.
Related Content