Connecting a heating radiator to a two-pipe system: choosing the best connection option

The heating circuit with two pipes, for supply and return, has many advantages over an analogue with a single heating medium circulation line, so it is often used in the organization of heat supply.

There are several ways to connect a heating radiator to a two-pipe system. The supply method affects the heat transfer efficiency of the battery, so the issue of its choice should be given special attention.

In the article, we highlighted the pros and cons of a two-pipe heating system, described the specifics of different piping connection schemes, and also made recommendations on choosing the best supply option based on the type of radiator and the characteristics of the room.

What is a good two-pipe scheme?

Existing heating systems are divided into three groups - one-pipe, two-pipe and collector. The cheapest option is the first option. However single pipe system least effective in terms of adjustable heat transfer in rooms and heat consumption.

The maximum effect on these indicators gives a scheme with heating manifold. But it will cost the most in the creation. An analogue with two pipes occupies a middle ground between them in terms of cost and performance.

The two-pipe system is much superior in efficiency to the one-pipe system, and with proper design, it costs only 10–25 percent more to install it

In a heating system with two independent pipelines, one of them carries coolant, most often water, is supplied to the radiator, and the other is diverted. As a result, each battery in the circuit receives almost the same amount of heat to transfer it to the room.

In a one-pipe analogue, the coolant is supplied to the radiator and is discharged through one common heating pipeline. In this case, the first room heater from the boiler (boiler) receives much more thermal energy than the last in the chain.And it turns out that in the room farthest from the water heater it is always cool, and in the room closest to it it is too hot.

The basic visual difference between these systems is the presence of a bypass in the single-pipe wiring next to the battery. This jumper provides uninterrupted circulation of the coolant when one of the radiators is required to be completely or partially disconnected from the heating. In a heating circuit with two pipes, it is simply not needed.

Among the main advantages of using a two-pipe system:

However, you have to pay extra for efficiency. heating pipes. Each radiator in such a system is supplied with a pair of pipelines with a coolant from the boiler - one for the supply of heated water, the second for return.

A private mistake when choosing between single-pipe and two-pipe schemes - the second option, according to estimates, comes out one and a half to two times more expensive than the first, which is completely wrong

If the pipe is one, then it is laid in the project wider in cross section than with a two-pipe wiring. As a result, the total cost of these two options for materials does not differ so much.

But the volume of installation work really doubles. If the installation is done with your own hands, then this moment is not so relevant. However, if you order the assembly of the system on the side, then you will have to pay a little more for a scheme with two pipelines. But it will definitely not come out twice as expensive.

Before choosing a method of connecting a radiator to a water heating system, you must carefully study the heater itself.

It consists of a pair of horizontal collectors interconnected by vertical jumpers. A “casing” is put on top of the entire structure in the form of a heat exchanger with the maximum possible contact area with the air around.

The classic aluminum, steel, bimetallic or cast-iron radiator has four pipe connectors, but there are also options with only two pipes

To connect the device in question to any pipe heating system, only the input and output are required. The manufacturers make four connection points in the radiator for the sake of versatility. So the battery can be connected in any of the existing ways, simply closing the two remaining inputs and outputs with plugs.

The pipes for connecting the heating pipes in the radiator are located on the side or bottom. Lateral connection is more practical and the most common.

The lower counterpart is usually chosen for aesthetic reasons. With it, the pipelines can be mounted in the floor, making them completely invisible. The interior as a result is more beautiful.

In radiators with pipe connectors, there is a special jumper inside that makes the coolant circulate over the entire area of ​​the heater, and not go directly to the return to the return without heat loss

There is no fundamental difference in heat transfer between the "side" and "lower" radiators. Here, the method of connecting pipelines with a relative position relative to each other is the feed and return budgets.

At the same time, devices with pipes from below are recommended to be connected exclusively in systems with forced circulation of the heat carrier, but not natural feed. In the second case, it will be too difficult for heated water to rise from the entrance up and heat the battery.

Ways to connect a radiator

The heat transfer efficiency of the radiator directly depends on the choice of the connection scheme for the heating pipelines. If the coolant does not circulate throughout its internal area, but quickly enters the return line, then the battery gives up heat to a minimum.

The most effective way to connect is diagonal. With it, water inside the radiator manages to cover all sections on the way from entrance to exit, giving each thermal energy

There are three ways to bring pipes with a coolant to the radiator:

In the passports for radiators, heat transfer is usually indicated for the diagonal connection method. With a side connection, heat loss will reach 10% of this maximum. And with the horizontal version, they can reach all 20–25%.

However, much depends on the number of sections and the internal structure of the battery. Plus, an important role is played by the material of the radiator manufacturing, as well as the place of its placement in the room.

Schemes of piping for supplying coolant are:

If the system is with natural circulation, then a circuit with an upper wiring will be more effective and preferable. But if available circulation pump both options are acceptable.

Directly radiator connection process it does not depend much on the method of supplying the heating pipes. The supply and return are connected to the battery in accordance with the selected circuit. And the remaining two holes are closed by a Mayevsky crane and a plug.

In this scheme, the main with the coolant to the radiator comes from above. The outlet pipe can be connected on the same side, in the lateral version, or on the other (diagonal analog). In this case, the movement of water in the supply and return circuits can be associated or oncoming (deadlock).

If there are less than ten sections in the radiator, then the lateral way of connecting the pipes is practically not inferior to the diagonal - but with a larger number of them, the coolant will reach the farthest edge of the battery only with a high pressure in the system

When choosing the top connection, it is recommended to organize the movement of the coolant according to the associated scheme. In this case, the return and supply circuits are obtained approximately the same length, which greatly simplifies the balancing of the entire system.

The diagonal method of connecting pipes with an upper supply of coolant is considered the most effective. However, with proper design, the remaining options are also quite applicable. And, often, they also turn out to be more favorable at a price. In this case, all work can be done independently.

In practice, a dead end scheme is used more often, since it requires pipes a little less in footage.

If the house is small - up to 200 square meters. m and you want to save as much as possible on the heating system, it is worth choosing a scheme with oncoming movement of heated water. Here, the adjustment is not so complicated and quite feasible. But for a large cottage - two or four floors, it is better to choose something else.

In this case, the coolant is supplied from below. If such a wiring is built in a one-story house, then this allows you to get rid of the risers. Both pipes are laid from the boiler along the floor and do not distort the interior with their appearance. The fewer pipelines in the room, the more beautiful everything looks.

The main advantage of the lower supply is the absence of risers, which slightly reduces the amount of the estimate for the arrangement of the heating system in the house

The return can be connected in such a scheme:

If you use a conventional radiator, without a special partition for more efficient circulation of the coolant inside, it is best to choose a diagonal connection method.

However, the hydraulic resistance in this case comes out more than with the horizontal version. Here we must carefully consider what is more profitable, making heat engineering calculation.

Often the horizontal method is obtained as efficient as possible for heat loss. But this is only possible if there is a plug at the input between the first and second sections of the battery, which directs the coolant up the entire radiator. So the resistance is minimal, and the maximum heat transfer.

The lower supply is recommended to be selected only for circulation heating systems. With the natural movement of the coolant in the radiators, air will constantly accumulate, especially with horizontal and lateral connection of pipelines.

It will have to be constantly lowered with Mayevsky cranes. And these are additional gestures, therefore it is better to initially rid yourself of such worries.

How to connect the radiator in a two-pipe system:

Nuances of connecting the battery to the coolant supply and return:

Installation of a radiator in a heating system with two pipes:

When connecting radiators, the main thing is not to forget to install thermostats on both pipelines to accurately balance the heating system at home. But even more important, make a good heat engineering calculation for a particular cottage with the right choice of pipes for the section and the number of sections.

This moment is better to delegate to the professional. Otherwise, you will have to overpay for extra pipes and the area of ​​radiators or then add new elements to the system.

Share with your readers your experience in connecting radiators to a two-pipe heating system. Please leave comments, ask questions about the topic of the article and participate in discussions - the feedback form is located below. 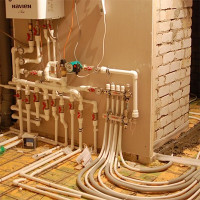 Optimal wiring of heating in a private house: a comparison of all typical schemes
3 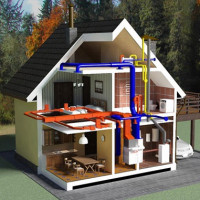 Heating scheme from a gas boiler in a two-story house: a review and comparison of the best heating schemes
0 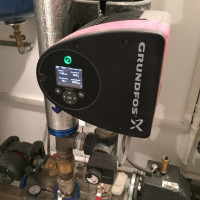 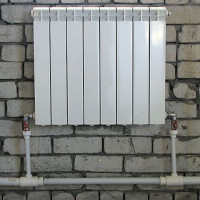 One-pipe heating system of a private house: schemes + an overview of the advantages and disadvantages
9 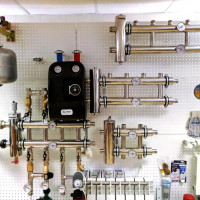 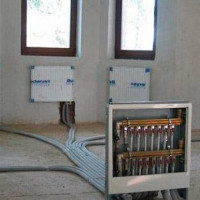