What to do if the gas boiler blows in the wind: causes of the boiler attenuation and methods for resolving the problem

Autonomous heating system provides a comfortable environment. When it fails, established order and comfort are disrupted. Agree, nobody wants to stay in the winter with a constantly fading heating boiler. And if a gas boiler blows in the wind, what should the owner do in such a situation?

We will help to deal with this problem - the article discusses the causes of boiler attenuation and methods for solving this problem. Visual photos and videos are provided.

Reasons for the extinction of the burner flame

The attenuation of the boiler from the wind is not such a rare problem. This is less common for apartment owners - 95% of the equipment has a coaxial duct. But homeowners often face burner attenuation. Let's try to find the source of the problem and restore the device.

So, the boiler may go out due to inconsistencies in the technical parameters of the chimney and operating conditions. Another factor wrong arrangement of ventilation. It is reasonable to entrust the elimination of such malfunctions to specialists.

In most cases, the burner goes out due to the design features of the entire heating system or under the direct influence of external interference

Often there is a situation when the air mass acting from outside creates pressure and the check valve is activated. A strong gust of wind returns it to the closed position, the gas supply to the furnace is stopped. In this case, reconstruction of the chimney is needed.

The boiler attenuation may be due to:

Why else can a gas boiler go out in the wind? Sometimes the equipment is located in the kitchen with a balcony on the second or third floor of the building. It is enough to open the balcony door so that a strong draft is formed sharply, the wick began to oscillate and fade.

The cause of the attenuation of the burner can also be the burning of the pipe, when air enters through the hole and interferes with the normal operation of the chimney. In this case, you need to change the chimney design

It is useful to inspect the exterior of the heating system for ice build-up.

It’s not worth knocking him down. It is necessary to shut off the gas, bring removable parts into the room for slow thawing. After returning them to their place, warm up the device, gradually increasing the gas pressure.

Ways to solve the issue of boiler attenuation

The option of restoring the operability of gas equipment depends on the cause of extinction. Next, we will understand what can be done to prevent the boiler from attenuating in the wind.

No. 1 - the fight against bad traction

In the context of the boiler attenuation problem, traction can be:

Sources of trouble lie in the design flaws of the chimney or current malfunctions. Particular attention should be paid to the location of the pipe - its upper part should rise at least half a meter from the extreme point of the roof.

The diameter of the duct is calculated according to special formulas (SNiP 41-01-2003). Its cross section and pipe height must correspond to the power of the boiler equipment

It is necessary to check the tightness of the joints, the health of the fan, the presence of foreign objects in the pipe, debris, a large layer of soot and eliminate the defects. Among the current malfunctions is the damage to the insulation - the chimney must be warm.

No. 2 - installation of a weather vane-deflector

The current method for the attenuation of the boiler from the wind - installation in the chimney deflector. The aerodynamic device can be of different configurations.

In a conventional weather vane, air flow is directed to the outside. Their interaction with the surface of the deflector creates a rarefied atmosphere, which increases traction.

The phenomenon, when air meets an obstacle, envelops it and creates a rarefaction zone, is called the Bernoulli effect. More airflow - less static pressure

A simple weather vane increases the efficiency of any pipe by 15-20%. But he is not able to completely solve the problem of the extinction of the boiler. It is more profitable to use a device of complex configuration.

AT Grigorovich deflector all elements are subject to the laws of aerodynamics.The device is two-cone. The interaction of the forward and reverse cones distributes the passing air currents so that a low pressure zone forms around the pipe.

After installing the Grigorovich deflector, the thrust increases several times. This is due to the temperature difference between cold and hot flows.

Wolpert baffle represents a design from two "glasses" - cylindrical and with expansion downwards. The top with a lid is somewhat on the bottom.

The design of this deflector is designed to ensure that, in any direction of the wind, gases are pushed out (sucked out) to the surface through annular openings

There is a joint device - Volpert-Grigorovich deflector. It contains an inverse cone, a curved surface of the diffuser and an umbrella cover. The design shows good efficiency in solving the problem of the extinction of the boiler and increases its efficiency by 25%.

The requirements for the deflector for the chimney of the gas boiler and installation instructions are given in next article.

Any deflector requires regular maintenance - cleaning and lubrication, otherwise the opposite effect will occur. Visors are not recommended to install umbrellas - they violate safety precautions.

No. 3 - gradual heating of the boiler

If the heating system has been shut down for a long time, the wind may blow out the gas boiler due to insufficiently heated chimney. This situation is typical for country houses, when after the first start-up of the equipment the burner quickly fades.

The explanation of the phenomenon is simple: it is difficult for spent combustion products to climb up the cold pipe, and gusts of wind interfere with the heating of the channel.

You need to act like this: start the system at low speeds and gradually increase the power of the device to optimal performance. This will create natural conditions for the release of hot combustion products.

Solving the problem for different types of boilers

Equipment with a closed burner is referred to as turbocharged and it needs electricity to function. To prevent damage to the control board in the event of a power outage, install the boilers when installing Voltage regulator.

Boiler units with an open combustion chamber are called atmospheric. They are independent of the power supply system.

So, atmospheric and turbocharged boilers have a different device. Therefore, the principles for solving the problem with their attenuation will also differ.

Atmospheric boilers are non-volatile. But in a turbocharged cause of burner attenuation, there may be a malfunction in the electronic part, and not just wind blowing

AT atmospheric boilers natural traction. The device does not receive the set volume of air if it is insufficient or insufficient air flow. It is necessary to artificially increase the amount of oxygen taken in by means of arranging additional supply ventilation and a regular hole in the door with a grill.

You can also use one of the methods:

Turbocharged boilers more stable in operation, but if installed on the leeward side.

In the opposite situation, installation of the deflector or reconstruction of the chimney by creating a system in it will help "Traction gap" - construction inside the chimney of the zone, preventing the reverse movement of combustion products.

Installation of a partition from the wind.

How to make a protective cover for a parapet boiler.

What is useful to know before installing and operating a weather vane deflector.

The effectiveness of the heating system depends on the competent thermal calculations when designing a home, proper operation and regular maintenance. Having considered the reasons why a gas floor or wall boiler blows out in the wind, we can summarize: the problem is eliminated by replacing (repairing) individual parts, checking or refitting the entire structure of the chimney.

Measures to restore the performance of the equipment should be entrusted to specialists. If you do this yourself, you must consult with experienced craftsmen.

Do you want to talk about your experience in solving the problem of boiler attenuation in wind? Write your recommendations in the comments section.

If you still have questions about the topic of the article, which we did not touch on in this publication, ask our experts. The feedback form is located below. 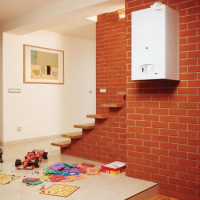 Why a gas boiler often turns on and off: the causes of malfunctions and their solutions
2 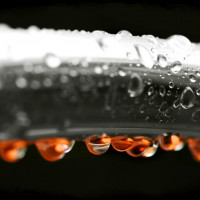 What to do if condensate in a gas boiler: methods for preventing the formation of “dew” in a chimney
0 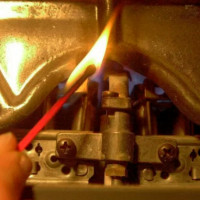 Why does the gas boiler go out? Overview of typical faults and how to solve them
0 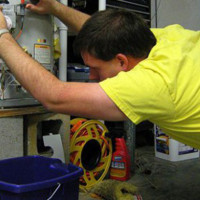 Water flows from a gas boiler: what to do if heating system equipment has flowed
1 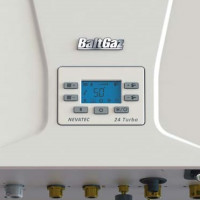 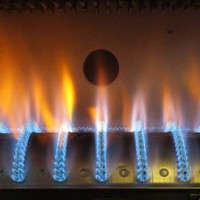