A significant level of discomfort is created by noise. And it is not necessary that the noise is pronounced. Even quiet, but constant sounds, for example, the flow of water in pipes, can lead to disorders of the nervous system.

Modern residential buildings create comfort for people through plumbing, heating, sewage. But this comfort is limited if noiseless sewage is not provided, as well as noise isolation of other communications.

Is there a sewage system without noise?

Technologies for the production of plastic pipes, which enjoy a high level of popularity in construction, are being consistently improved.

If products with frankly low noise reduction characteristics were produced at the first stages of production, now the situation is changing. In the market, you can increasingly see the so-called silent pipes.

Image Gallery
Photo of
Silent sewage is a communication system, all elements of which are arranged taking into account the maximum reduction of all types of noise during its operation
All components of the sewer system are constructed in accordance with the regulations of DIN 4109. This means that the noise level during operation does not exceed 12 dB
In the manufacture of pipes and fittings for the assembly of silent sewage, polymer compositions are used that can spontaneously suppress sounds
From polypropylene with a special sound-absorbing structure, connecting parts, plugs, bends, tees are produced. . Fittings and pipes are supplied with shock absorbers.
For the device of trunk lines, risers and branch branches of all levels, an extensive range of products is produced, which makes it possible to assemble a system of any complexity without problems
In the construction of silent sewer systems, brackets and holders are used that exclude or significantly reduce vibration phenomena
In the event that the sewer system crosses the residential and utility rooms, they try to lay the track behind sound-proof false structures
A budget option that can become an alternative to a silent sewer system is to lay ordinary sewer pipes in an insulated duct
Silent sewer
Silent Sewer Riser
Sound absorbing polypropylene pipes
Fittings for the construction of sewer networks
Silent sewer product range
Using silent mounts and holders
Choosing a route for laying sewers
Low-cost alternative to silent sewage

What are silent sewer pipes? These are products for the production of which, along with traditional materials, materials are used that can absorb sound waves.

The structure of a silent sewer pipe is formed from several working layers:

According to various estimates, a three-layer sleeve with a similar structure reduces the noise level from the fluid flowing in the pipes to at least 20 dB. This value is fully consistent with European standards (DIN EN 14366).

Using these parts, the polymer pipes are fixed to the mounting base. The clamp itself is a simple product - a metal hoop. But with it, a soft polymer insert is used, the material of which effectively dampens mechanical vibrations.

Of course, the silent domestic sewage does not become such only because of the replacement of ordinary trunk lines with silent pipes. This option is one of several that can be used to combat unwanted sounds.

If isolate standard sewer pipe sound-absorbing material and replace the hard supports with fasteners with a soft insert, you can already get a good result.

Considering that it is difficult and expensive to completely remake an existing sewage system, it is reasonable to limit ourselves to the creation of insulating boxes. In combination with insulating material, this approach will have a double effect.

A mounted sewer coupling is used to connect two plastic pipes according to the principle of a socketless circuit. Structurally, the sleeve coupling is made taking into account the compensation of shifts from thermal expansion

If sewage is arranged from scratch, in this case it is worthwhile to carefully approach the installation procedure. Correct installation, work with shaped elements - these criteria also give a good effect of silence in the process of future operation of the system.

For example, it is recommended to connect tubeless pipes to each other as follows:

By the same principle, a bell-shaped one is performed pipe connection, connection with tees and corner fittings. Moreover, in most cases of socket mounting, the creation of expansion joints is considered.

Pipe and fitting joints, performed without the use of a sleeve coupling, arranged on a pipeline section up to 3 meters long (horizontal section), require compensation for thermal expansions.

That is, during installation, a 10 mm pipe recess is mandatory after it is inserted into the socket until it stops.The effect of thermal expansion is allowed not to be taken into account only in schemes of bell-shaped connections between fittings.

A fragment of the scheme of a sewer riser, on the line of which a bell connection is used. The standard arrangement of mounting clamps (rigid and floating fixation) is shown. With this arrangement of fasteners, optimum noise performance is achieved

Method for creating a bell-shaped joint:

Separately, it is worth considering the method of fastening silent sewer pipes (for example, the Skolan brand). Here pipeline laying requires performing in such a way as to exclude physical stress and the possibility of linear expansion.

You can fix the now popular polymer sewer pipes with standard clamps, but under the hoop of the clamp you should definitely use linings based on profile rubber.

Fragment of the scheme of the sewer riser, showing how the mounting clamps (sliding and fixed fixing) are located on the pipe section without fittings

Subject to the following principles when installation of sewer system, really get the acceptable noise characteristics of household sewage at the level of 12-20 dB.

Under no circumstances should machine oils or similar lubricants be used as the lubricant for joint elements. All of them have a negative effect on the structure of rubber seals.

Rubber loses its technical properties; cracks and roughnesses appear on seals. Such a seal becomes not only a source of increased noise, but at any moment it threatens with a gust.

The connection of polypropylene pipes is preceded by lubrication of the areas directly involved in the contact. A specialized water-based gel (grease) is used as a lubricant.

It must be remembered that the “straight pipe - socket” joints are always mounted taking into account the installation of the edge of the socket against the flow of drains. Under such conditions, maximum smoothness of the inner surface of the sewage line is ensured, which in turn is accompanied by a low noise level of the stream.

The noise characteristics of the sewage system are also affected by the value pipe slope. It is not recommended to depart from the established standards and norms that determine the amount of slope depending on the diameter of the sewer sleeve.

Turns of piping lines, as well as branches, are made by installing oblique tees or half bends (angles 30-45º). The principle of building networks in this way helps to reduce sewer noise.

The effect of noise suppression during salvo discharges into the sewers is especially noticeable.In addition, smooth bends of turns create better conditions for the case of cleaning the system with a sewer cable.

The correct (incorrect) execution of turns in the domestic sewage system is one of those factors that affects the amplification (reduction) of noise. On installation, it is recommended to adhere to the methodology for creating smooth turns and bends

Plastic pipelines in straight horizontal sections should be fixed with clips, supporting clamps, suspensions every 7-9 meters. If you move away from these requirements, there is a risk after some time of operation to get sagging in such areas of the region.

Sagging pipelines - a change in the parameters of the movement of effluents and, as a result, an increase in noise. In places of bell-shaped joints, fasteners are carried out by default.

There are brands that have proven excellent quality and are firmly entrenched in the domestic sewer product market.

In recent years, market offers have been surprisingly with a wide selection of branded silent sewer systems. From the available examples for installation, it is possible to note, for example, a product under the brand name "Vavin Asto".

The company manufactures and supplies for sale. polypropylene pipes and fittingsbased on ASTOLAN - a material modified by mineral additives.

The low-noise sewage system manufactured by Wavin Asto (a set of pipes and fittings) is a turnkey solution that takes into account all the nuances of sound insulation. It remains only to assemble the system in accordance with the instructions and enjoy the comfort

Thanks to the modification, the engineers managed to raise the density of the walls of the sewer pipes to a value of 1.9 g / cm3 and strengthen indicators such as viscosity and specific gravity. As a result, virtually silent Vavin Asto sewage systems appeared.

According to the assurances of company representatives, during the operation of the system there are no vibrational noises. Penetration of sewage sounds through airspace is also excluded.

Another example of a modern system without noise is a sewage system based on pipes and fittings of the Ostendorf brand. The base material is the same, mineral-modified polypropylene.

But the density indicators in this case are slightly inferior - 1.6 g / cm3. At the same time, the temperature parameters of the Ostendorf sewage system are higher - up to 100ºС, and the pH values ​​are in the range of 2-12.

The German company Ostendorf offers to use engineering solutions that guarantee peace in the house. German manufacturing techniques for sewer pipes and fittings exclude the manifestation of technical noise above established standards

The branded product Ostendorf is characterized not only as low-noise. All elements of production are characterized by a high degree of corrosion resistance, durability, resistance to the influence of aggressive environments. An extensive range of fittings and pipes provides the creation of communications for various purposes.

Rehau and REHAU RAUPIANO Plus

Rehau systems also show a high percentage of popularity. In particular, the product REHAU RAUPIANO Plus is aggressively advertised. The technological approach, however, is not much different from the two previous firms.

The emphasis in the fight against noise “Rehau” is also placed on the production of multilayer plastic pipes, on strengthening the wall thickness of corner fittings, on the manufacture of so-called “noise-absorbing” clamps.

Parts for the installation of a household sewage system, manufactured under the Rehau brand, are made taking into account effective sound insulation. Rehau-based sewer installation promises a quiet life

The practice of operating such a sewer shows a noise reduction of about 25-30%.If desired, similar indicators can be achieved if you perform standard work on sound insulation of a domestic sewage system using available insulation materials.

With guidelines for choosing the best pipes for the device of the internal sewer system acquaints next articlecontaining a lot of useful information.

Some useful tips on how to reduce the noise level of a sewer system and make your life more comfortable.

A low-noise sewer system is possible, as evidenced by numerous proposals in the plumbing industry. Meanwhile, there were practically no problems with the noise parameters of the drains as long as the good old cast-iron pipes were used.

As soon as light and inexpensive polypropylene appeared in everyday life, so after it there were problems with silence in the house. There is something to think about for both plastic manufacturers and homeowners.

Please write comments in the block below. Tell us about how you built a silent sewer in your own house / apartment, or about technological nuances not mentioned in the article. Ask questions, share useful information, publish photos on the topic. 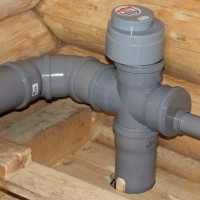 Internal sewerage: device options in an apartment and a private house
1 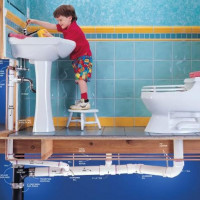 Do-it-yourself sewerage in an apartment: rules for internal wiring and installation
4 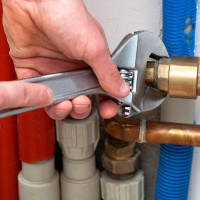 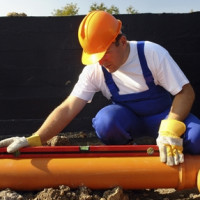 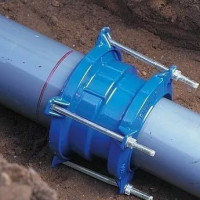