Thermocouple in a gas stove: principle of operation + instruction on replacing the device

Cooking on a gas stove or gas-fired hob is as simple as cooking on ordinary electric hobs. Even the use of a gas oven causes any problems extremely rarely. But many immediately have the question of the safety of such equipment, because "blue fuel" is explosive.

Hardly anyone wants to see their housing destroyed by a gaseous fuel explosion. To prevent such a tragedy, a device such as a thermocouple in a gas stove is used. It is the main element of the health monitoring system of the most popular gas appliance.

Agree that in the case of natural gas, special attention must be paid to reducing the risks of fires and explosions. The article presented by us provides and describes in detail the rules for operating household gas processing equipment. We supplemented the useful information with valuable recommendations.

The gas in the burner of the stove is ignited by matches, a manual piezo-lighter or built-in electric ignition. Then the flame should burn itself without human intervention, until the fuel is shut off by a valve.

However, often the fire on the gas hob or in the oven goes out as a result of a gust of wind or a splash of water from a boiled pan. And then, if there is no one nearby in the kitchen, methane (or propane) begins to flow into the room. As a result, when a certain concentration of gas is reached, cotton occurs with fire and destruction.

The thermocouple controls the presence of an open flame in the burner, and if it is absent, it shuts off the gas supply for half a minute to minutes to prevent tragedy

The working function of the thermocouple is flame monitoring. While the gas is burning, the temperature at the tip of the control device reaches 800–1000 0C, and often higher. The result is an EMF that holds the gas solenoid valve on the nozzle to the burner in the open state. The hotplate is working.

However, with the disappearance of open flame, the thermocouple ceases to give EMF to the electromagnet. There is a shutdown of the tap and fuel supply. As a result, gas does not enter the kitchen without accumulating in it, which eliminates the occurrence of a fire from such an emergency situation.

A thermocouple is the simplest temperature sensor without any electronic devices inside. There is nothing to break in it. It can only burn out from prolonged use.

With a complete set of sensors designed for monitoring and safety of the gas column, will introduce next articlefully dedicated to this interesting subject.

Among the advantages of thermocouples:

There is only one significant drawback for a thermocouple - the difficulty of repairing the device. If the thermocouple sensor is faulty, then it is easier to replace it with a new one.

To repair such a device, it is necessary to weld or solder at high temperature (about 1,300 0C) two different metals. In everyday life at home, it is extremely difficult to achieve such conditions. It is much easier to buy a new control unit for a gas stove for a replacement.

Device and principle of operation

The thermocouple is based on the Seebeck thermoelectric effect. According to him, at the ends of series-connected conductors of different metals, provided that their contacts are at different temperatures, a thermo-EMF (TEMF) occurs.

That is, it is necessary to have two conductors of different composition that can withstand strong heating, and high-temperature heat (in this case, from combustible natural gas) at the point of their connection.

In most pairs, the electromotive force arising between cold and hot contacts is very small and inapplicable. But there are metals and alloys, the combination of which gives up to 4–5 mV / 100 0C. And this is already enough to control the electromagnet that controls this or that shutter.

Thermo-EMF in most varieties of thermocouples for gas stoves reaches 15–30 mV, and usually 5–10 mV is enough to keep the electromagnetic valve in the open state

The principle of operation of thermocouples mounted in gas stoves is extremely simple:

The thermocouple consists of two thermostable conductors up to one and a half meters long, which are connected by soldering or welding at one end.

It is this tip that is directly on fire and is heated by burning gas. The second end of the device is a pair of contacts or a connector for connecting to a solenoid valve.

Varieties of temperature sensors for gas

Thermocouples of gas stoves differ in the alloy of conductors and the type of connection to the valve. And the main thing here - each manufacturer of gas equipment uses its own versions of electromagnets with different connection sockets.

In most cases, it is impossible to rearrange the thermocouple gas monitoring sensor from one tile to another.

The thermocouple must comply with the model of the gas stove; it is forbidden to install the “left” control device for safety reasons

Alloys and metals for creating thermocouples are used as follows:

The accuracy of the device and the range of its operating temperatures depend on the alloys used. For example, a chromel-alumel thermocouple is designed to operate at 0–1100 0C, iron constant at 0–700 0C, and platinum-platinum rhodium withstands heating up to +1700 0WITH.

In household gas stoves, thermocouple sensors from alumel and chromel or constantan and iron are usually used. They are inexpensive and quite suitable for the temperature conditions of the gas hob.

If the gas on the stove goes out, then the problem may lie not only in the thermocouple. However, most often it is precisely in it.

The main sign of problems with gas control is that after ignition of the burner and the release of the knob or the “blue fuel” button, the flame will go out immediately. This is due to valve closure, since thermo-EMF is absent or insufficient to keep it open.

Noise reasons gas stove burners set out in detail in an article whose useful information is worth reading.

Before you purchase a new thermocouple, you need to determine the cause of the poor operation of the existing device - there may be a problem in the removed contacts on the valve, then you just need to tighten them

Do it yourself, carry out repairs and replace the thermocouple in the gas stove with your own hands only when the gas is completely shut off. First, close the valve on gas cylinder or a pipe with methane, and only then proceed with any work. Also, do not forget about turning off the power supply, if the design has volatile devices.

The thermocouple tip is located directly next to the hotplate and gas fire. And in the oven you can find it near the flame divider in the upper part of the oven. This tip should be free of carbon deposits, mineral deposits and any damage.

If the working tip of the thermocouple sensor is covered with scale, then it must be cleaned with sandpaper. The more carbon deposits, the less heat reaches the thermocouple, and the less it creates EMF accordingly. The resulting millivolt may not be enough to open the solenoid valve.

How to check before replacement?

A thermocouple usually has one tip for installation near a fire. But there are options with two or three tips for temperature control. They are usually used in ovens, but it all depends on the particular stove model.

Thermocouples with several working tips have a feature - if only one of them is not heated or malfunctioning, the electromagnetic valve will be closed. Therefore, in order to accurately find the cause of the problems, such thermocouple devices will have to be checked especially carefully. Only one of the sensors may be faulty.

A working thermocouple for a gas-fired stove, when heated above a candle, after 20–30 seconds gives an emf of the order of 15–20 mV - if less, then the sensor must be changed

Another point is that the thermocouple conductors in the area up to the valve must be tensioned or dangled in the plate body. At the same time, their connection to the electromagnet must be rigid, the connector hanging “on parole” is unacceptable here.

The devices under consideration are available with a length of 40 to 130 cm. The thermocouple gas monitoring device should be selected carefully according to this indicator. On the one hand, the wire of the conductors must not be excessively stretched, and on the other hand, it should not lie on heated surfaces or hang loose.

How to change the device?

Before changing a damaged thermocouple in a gas stove, inspect the device for:

Change the device in question only when it is definitely defective. In many cases, in order for the gas stove to work again, you can do without cleaning the tip from soot and checking the contacts.

To replace the thermocouple, you will have to remove the front panel from the gas stove, and also lift the top cover with rings on it

The working tip of the thermocouple is rigidly fixed near the burner or burner with a nut. If it cannot be unscrewed due to scale, then it is not worth putting pressure on the key. So you can only break the mount. It is better to use a solvent first.

The second end of the thermocouple to the solenoid valve is attached using a threaded connector or two crimp contacts. To remove them does not seem to be difficult. The new thermocouple sensor is installed in the same sequence - at one end it is mounted near the burner, and the second to the electromagnet.

How do you replace a thermocouple with your own hands:

The principle of gas control in the hob and oven:

A gas stove without a working thermocouple is a source of danger. If the gas control ceases to function, it is quite acceptable to replace the sensor with your own hands. There is nothing complicated in dismantling the old and installing a new control device. You just need to purchase a device that matches the existing tile model, and work a little with a gas wrench with a screwdriver.

If you have comments on the topic or your comments on the above information, write them in the block below. Your stories about the nuances of replacing a thermocouple that you made yourself will be interesting to us, as well as to other readers. Write, do not be shy. 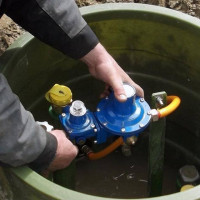 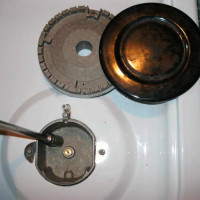 Replacing the nozzles in a gas stove: purpose, structure and detailed instructions for replacing nozzles
0 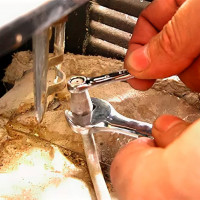 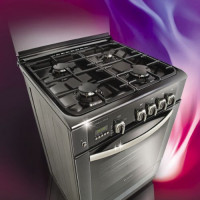 How to ignite an oven in a gas stove “Hephaestus”: ignition rules and the principle of operation of a gas oven
0 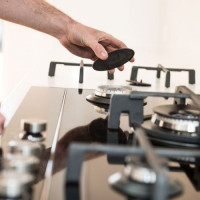 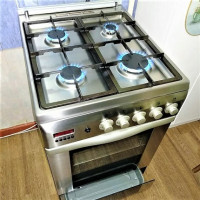 How does a gas stove work: the principle of operation and the design of a typical gas stove
0
Add a comment
Click to cancel reply.
Related Content