Replacing fluorescent lamps with LEDs: the reasons for the replacement, which are better, replacement instructions

Light devices are constantly being improved. This process is easily traceable, starting from the moment the appearance of the “Ilyich’s bulb”. As a result of modernization, in addition to direct incandescent lamps, luminescent options appeared, and in modern conditions the replacement of fluorescent lamps with LED devices is a rather urgent task.

Society strives for the best, and this is obvious. The main criteria for aspirations are convenience, comfort and, of course, economy. But how to make the replacement and what should be remembered? We will consider these issues in detail in our article, we will deal with the features of LED and fluorescent bulbs, their pros and cons.

We also provide recommendations for choosing a suitable light bulb and step-by-step instructions for replacing the device.

Features of the device of a fluorescent lamp

In order to more clearly understand the society’s desire to replace fluorescent lamps with LED devices, it’s logical to get acquainted with the gas construction more closely.

Indeed, a light device with a luminescent coating is a sealed glass tube, usually filled with mercury vapor.

Fluorescent lamps with lamps filled with a gaseous medium are “fed” with electricity through a throttle element. More advanced designs are equipped with an electronic circuit without chokes and are considered somewhat improved in terms of operation

Two modifications of such devices are available:

In fact, a gas mixture consisting of mercury vapor and argon is present inside the luminescent lamp balloon. From the inside, the walls of the glass flask are coated with a special composition - a phosphor.When an electric discharge is formed in a gaseous medium, a luminescence of gas is formed, and due to the phosphor, this luminescence is transformed into visible light.

In more detail about the device of luminescent we wrote in this article.

The advantages of fluorescent lights

The development and production of luminaires of this type, first of all, were the result of a constant demand for energy savings. We must pay tribute - fluorescent lamps can significantly save.

An energy-saving light fixture and a traditional direct-filament light source. If we compare by energy parameters, the difference is significant in favor of the first device, where current consumption is reduced by several times

At the same time, it is possible to save due to higher light output of devices, placing a smaller number of devices per unit area in comparison with direct incandescent lamps.

The feasibility of using gas discharge lamps is noted not so much for the domestic sphere as for industrial and economic structures, that is, where it is necessary to cover large areas with minimal costs in terms of energy consumption.

Among the advantages of fluorescent lamps, a decent operational operating time stands out. The average operating time for gas structures is 10,000 hours.

Comparative cartography, where the electrical advantages of light devices of different periods of use are noted. As can be seen from the comparative parameters, a traditional direct incandescent lamp is the most "wasteful" light device

If fluorescent lamps are equated with analogs of direct heat, where the maximum operating time is 1000 hours, the predominant difference becomes more than obvious.

However, the existing advantages of fluorescent lamps, unfortunately, do not hide the obvious disadvantages of these devices. And the main negative here is the increased chemical hazard.

The bottle of each lamp contains at least 2 mg of mercury, and this chemical element is extremely dangerous for a living organism. Of course, while the flask is in an airtight state, the chemical hazard is reduced to zero.

Nevertheless, cases of the battle of glass cylinders of fluorescent lamps are quite common practice. Therefore, it is important to immediately think about the right recycling fluorescent tubes.

Also of the shortcomings should be noted "cold" light and the effect of "gating". Both effects have an adverse effect on vision. That is why fluorescent lamps are not widely used in the domestic sphere. In a word, there was every reason to put an edge on the question of replacing fluorescent lamps. A suitable alternative was found quickly.

An alternative to fluorescent lamps - LEDs - appeared relatively recently and was marked by obvious success from a technical and environmental point of view.

The variety of LED light devices is great. There are very miniature designs that fit in the palm of your hand, and there are lamps for fixtures similar in shape to fluorescent lamps

Structure LED based lamps does not imply the presence of any aggressive chemistry, especially harmful to human health. As such, there is no unified design for LED lamps.

On the contrary, this option is “sharpened” for a unique construction design.True, model series are produced, which include lamps somewhat similar to each other, with the exception of small parts.

Therefore, LED lamps are often used instead of fluorescent as point devices of light. Meanwhile, for domestic conditions, the factor of effective light scattering is usually not dominant.

A characteristic feature of LED luminaires is a small degree of light scattering in comparison with luminescent designs. Usually only multi-row linear lamps have a high diffusion level.

But if you compare the devices according to the degree of energy consumption (power), LED lamps look the most economical of all existing modifications. The same significant advantage of the LED design is declared in terms of durability. Even fluorescent devices with their maximum parameter of 20,000 hours are inferior to LED lamps with their standard of 50,000 hours.

An indisputable advantage is the overall dimensions of LED lamps. Perhaps these are the smallest light devices of all that exist.

It looks like one of the smallest light sources, included in the range of LED designs. It is used, as a rule, as a spotlight.

Traditional direct incandescent lamps can still argue in this direction, but the temperature parameters of traditional lamps reduce this dispute to a loss. LEDs heat up slightly (at a normal ambient temperature of 25-27 ºС).

The list of deficiencies usually consists of three main points:

Based on this list, you can understand the significant difference in price, which is often fixed in the market. As a rule, high-quality branded devices have high price tags. But the assortment in the low price category is, most likely, a substandard product.

Substandard LED devices. Some of them did not work even for one hour - they failed. In addition, in almost all of these fixtures there is a discrepancy in the quality of performance and the use of harmful chemicals

What is fraught with the acquisition of substandard products? In most cases, such lamps “suffer” a gating defect - flicker invisible to the human eye, affecting the brain system. In this case, the LEDs are no different from halogen. As a result, often for users, the case ends with nervous irritability, weakness, and poor health.

Budget devices are assembled from the same inexpensive parts that do not comply with technical standards. In the assembly process, toxic materials are used: lead, phenol, formaldehyde resins.

In appearance, this four LED lamps look quite nice. However, these products of an unknown Chinese company in practice were marked by an openly short service life. Often, such products are made of substandard material.

The conclusion is obvious: if you already buy an LED lamp, saving in this matter is simply inappropriate. In turn, buying an expensive product with eyes closed is also not recommended.

We recommend that you read the rating top led bulbs leading manufacturers of lighting products in the market.

So, if the technical and operational characteristics of LED linear lamps fell to the user's taste and the option of replacing fluorescent devices matured, how to do this?

Conditionally, you can divide the replacement into two options:

With the first option it’s clear - you have to remove the old bulbs (lamps), and instead install new ones that work on LEDs.

Why do the following work in sequence:

For the second option, a characteristic feature is the selection of LED light devices corresponding to the dimensions of the fluorescent lamps that are supposed to be replaced. It is imperative that cap LED bulbs are also matched (usually type G13 socle).

Linear LED lamps in configuration are no different from traditional fluorescent lamps. As a rule, the base part is optimally suited for installation on a chassis where gas appliances previously stood

The power lines of these elements are simply closed. That is, the power to the base of the LED lamp is led directly from the network, bypassing any additional elements.

The inclusion circuit of LED linear lamps. As can be seen from the figure, the connection here looks even simpler than with fluorescent devices. There is no peripheral fittings in the form of EMPR, electronic ballasts, starter elements

If the chassis is mounted on two or more LED elements, in this case the base pads for each device are connected to the others according to the parallel connection scheme.

Which lamps are best to replace?

It is recommended to use the standard principle, repeatedly verified by the personal experience of many users. The first recommendation is to choose devices from an assortment of well-known manufacturers that guarantee high product quality. Such devices are usually distinguished by high cost, but quickly pay off due to economical energy consumption.

Here is such an LED lamp, where the arrangement of working elements is marked in a three-row design, in terms of light scattering it approaches luminescent devices

Out of habit, a potential buyer chooses light devices with an eye on the power parameter. In this case, the power is determined in a slightly different way - taking into account the ratio of 1 to 10, when compared with a conventional direct incandescent lamp. For example, if the power of a conventional device is 100 W, then the LED analogue will correspond to 10 watts.

It is also important to focus on the color temperature of the lighting device. We wrote more about this parameter in the next article.

Based on the operating conditions, choose lamps according to protection class. For domestic use, the IP40 class is usually a satisfactory option. For rooms with higher requirements - protection class from 50 and above. More on protection class and value decryption we talked here.

The video demonstrates the practice of replacing one type of lamp with another. Sequential actions for the dismantling and installation of work items.

An example that is surely useful for practical application:

If you evaluate the technical characteristics, operating conditions and the operation of devices in everyday life, LED light sources win. They also have their drawbacks, but even if available, they can save energy and serve for a long time.

On an industrial scale, the savings are very significant if you choose reliable bulbs from trusted manufacturers with a good warranty period.

Have experience replacing fluorescent lights with LED bulbs? Please share your opinion in the comments section. Or maybe you still have questions after reading our material? Ask our experts and other site visitors for advice - competent users will be happy to share their experiences with you. 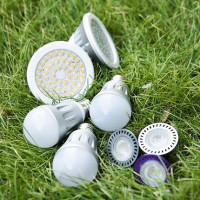 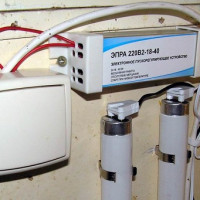 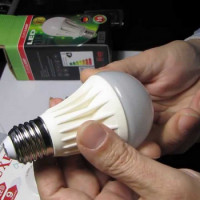 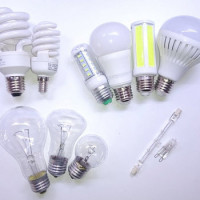 Which bulbs are best for the home: which are + rules for choosing the best bulb
3 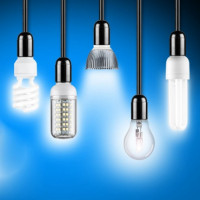 What types of bulbs exist: an overview of the main types of lamps + rules for choosing the best
2 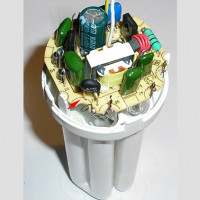