Assembly and installation of the chandelier: detailed instructions for installing and connecting with your own hands

The selection and installation of lighting fixtures is one of the most enjoyable steps in decorating your home. A beautiful chandelier with a spectacular design can become the "heart" of the entire design of an apartment or house. Properly selected lighting can emphasize all the advantages of the room and hide possible flaws.

However, the assembly and installation of the chandelier is often fraught with certain difficulties. Particularly often, problems arise when connecting models with an abundance of shades to the switch for a few keys.

But often homeowners can still do without the services of a specialist and install the chandelier on their own. In this material we will consider the main stages of assembly and installation, we will talk about the intricacies of the electrical connection of the lighting device and provide step-by-step installation instructions with visual photos and useful video materials.

Stages of assembly and connection of the chandelier

In fact, the installation of any chandelier goes through two main stages: mechanical and electrical. In the first case, all parts are connected into a single structure. During electrical assembly, the master needs to correctly connect all the wires, dividing them into separate groups, in order to correctly connect the device to circuit breaker.

Stage # 1 - mechanical assembly of the structure

Most manufacturers of lighting equipment supplement their products with detailed assembly schemes, which greatly facilitate the process of connecting all parts. However, even if there is no instruction, it is possible to understand the structure of even the most complex structure.

Most often, suppliers pack disparate details of the chandelier, forming functional blocks. Plafonds are placed separately from the horns, as is the case itself,terminals and other details.

Plafonds and decorative elements of the product are fixed last, therefore it is better to postpone their unpacking. This will help to prevent accidental damage to fragile glass or deformation of the decor.

After you make sure that the complete set of the chandelier and the integrity of the individual elements, you can proceed to the assembly of the device.

After the mechanical assembly of the chandelier, it is worth checking the symmetry of the arrangement of the horns. If the structure looks organic, carefully tighten the fasteners with a wrench. Decor and shades are installed after connecting the device to the mains and installing the chandelier on the ceiling.

Each horn design has its own wires that connect to the main cable of the chandelier. For convenience, their winding (insulation) is made in different colors.

The wires in the horns of the chandelier also need to be carefully removed through special holes in the body of the lighting device. After that they need to be grouped

It is necessary to break the cables into groups. For switches with one and two keys, this will be done according to different principles.

If the wiring device with one key is responsible for turning the chandelier on and off, the wires are connected as follows:

That's all - wire groups are ready for further connection.

If the supply wire for connecting the chandelier has three working cores (L1, L2 and N), the lighting device can be connected to a double switch.

The figure above shows the connection diagram of the chandelier to the two-key switch. For the convenience of users, the phases in the diagram are marked in different colors.

In this case, when disassembling wires from the horns, the number of vein groups increases to three. The first remains zero, and the phase wires must be evenly distributed into two groups - L1 and L2. Subsequently, when connected, they will be dispersed to both keys of the switch.

Stage # 3 - fixing the chandelier to the ceiling

First, it is worth attaching the design of the lighting device using the most suitable method for this.

For installation on concrete surfaces, a hook or a mounting bracket is most often used.

The way of fixing the chandelier depends both on the design features of the lighting device itself and on the type of ceiling in the room. Step-by-step fastening with a bracket is shown in the figure above

Now it remains to connect the groups of wires to the supply conductors. But color marking cores of home wiring may not always be understandable - sometimes all cores can be painted white. Therefore, before connecting, it is advisable to ring the wires with an indicator screwdriver or a multimeter to determine the phase and zero in the cables.

Phase search with a screwdriver

The indicator screwdriver is convenient in cases where the wiring cable consists of two cores. Checking phase and zero is extremely quick and easy.

To do this, disconnect the line by turning off the corresponding machine, and then clean the edge of the veinsreleasing from isolation about 1-2 cm.

Then spread the veins to the sides to avoid their accidental contact. After turning on the power of the line, take the indicator screwdriver. When the working part of the screwdriver touches the phase wire, the device will give a light signal. If, when interacting with a residential lamp on the screwdriver does not light up, this means that we have a neutral wire.

When ringing the wires with a screwdriver, it is important to remember safety precautions and not to touch the working part of the device and bare wires.

To correctly check the voltage in the conductor using an indicator screwdriver, you must always hold your finger on the contact plate of the device

Phase detection with a multimeter

A multimeter will be needed in cases where the cable of the home power supply network, in addition to the phase and zero conductors, has an earth line. Since the indicator screwdriver only reacts to the phase wire, it is impossible to distinguish the neutral conductor from the ground wire with its help.

In this case, you need to use a multimeter by following a few simple steps:

The data obtained should be interpreted as follows:

After determining the purpose of all the cores of the wire, you can disconnect the network and proceed to connect the cable of the chandelier.

Connecting the wires of the chandelier

To connect, it is necessary to connect the prepared groups of wires with the corresponding cores of the cable emerging from the ceiling, which will supply current to the entire structure. Why use PPE caps or Vago terminals.

In addition to the caps, when connecting the cores, special Wago terminals can be used to protect the twist. A separate product is used for each group. A twist of the chandelier wires is placed in one of the holes in the terminal, in the second a supply core is fixed, corresponding to the group of wires of the lighting device: phase or zero

Special connector caps, which should additionally protect the junction of the cores, are often supplied with a chandelier. To install this part, carefully screw the plastic cap over the twist.

If the manufacturer has not supplemented the complete set with a PPE-cap, it should be purchased separately, since when electrically connecting the lighting device, it is unacceptable to be limited to just twisting. We recommend that you familiarize yourself with connection methods electrical wires.

After these works, carefully place the wires in the base of the chandelier and you can put on the housing cover.

After connecting the wires to the network, the chandelier is fully installed: final fixing of the decorative cover, installation of shades and decorative elements.

The author of the following video talks about connecting different types of chandeliers and explains how to connect a chandelier from a single switch to a double:

The creator of this video reveals the intricacies of installing a chandelier on a French stretch ceiling:

About the features of connecting and adjusting the LED chandelier with a remote control tells the master installation of lighting fixtures:

Elementary knowledge in the field of electrical installation will make it possible to independently assemble and connect a chandelier even with the most unusual design. But it is important to remember safety precautions and be sure to turn off the power to the line when connecting a lighting fixture.

However, when buying a model with a very complex configuration or if you want to use a switch with three or more keys, you should still contact a professional electrician. The master will be able to correctly distribute the wires and correctly connect the device to the network.

Still have questions about connecting a chandelier? You can ask them to our experts and other site visitors - the feedback form is located below. Also here you can leave recommendations and share installation secrets that will be useful to other users. 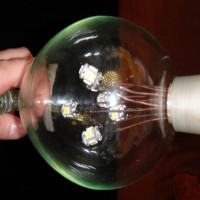 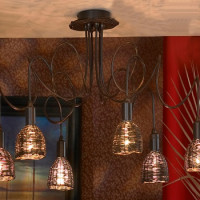 Connecting a chandelier to a double switch: schemes + installation rules
3 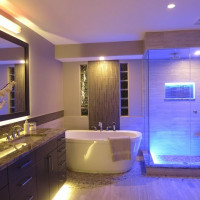 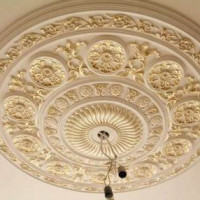 Ceiling outlet under the chandelier: instructions for installing the outlet on the ceiling
4 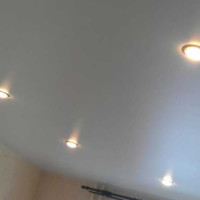 Installation of spotlights in the ceiling: installation instruction + expert advice
0 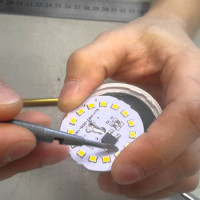