The rapid development of electricians was marked by a mass of innovations that affected even simple but extremely necessary connecting elements - terminals. Among the existing variety of such devices, self-clamping terminal blocks occupy a special place, due to which the wiring is greatly simplified.

You will learn all about the innovative form of connectors from our article. We will introduce the assortment currently presented to a novice electrician. Consider the most popular connectors of this kind, in high demand.

The device of self-locking connectors

Technically, the design of self-clamping terminals does not stand out with special difficulties, despite the promising name.

As a rule, the main working component of such products is the spring element. It is due to the spring action that the self-clamping property of the terminal is obtained.

The design of the terminal involves the concentration of force in a specific area, limited, for example, by the parameter of the wire section. Therefore, self-clamping connectors of various form factors are supplied to the market, providing the ability to work with various electrical wires.

Such an approach to processing guarantees reliable protection against possible corrosion, ensures the durability of the product.

The surface treatment of the terminal block construction elements allows you to save the durability of the mechanism, the properties of reliable contact, the overall functionality of the device

The self-clamping effect is ensured by a spring made on the basis of durable steel. The spring "supports" the clamping element with a calculated force that is almost equal to the force that the user must apply to the working lever before inserting the wire into the groove.

According to technical information, the self-clamping terminals are designed to work with conductors with a cross section of 0.08-95 mm at operating voltages up to 1000 volts. Operating current parameters are allowed in the range of 6-320A. The main area of ​​application is household, but industrial products are also produced.

Actually, there are two varieties of products of this type:

The first variety is a design where micro levers are used. A potential user raises or squeezes such a lever, and then inserts the wire end into the socket. After releasing the lever, the copper or aluminum core is firmly pressed by the spring-loaded plate.

One of the common designs of the self-locking terminal block, where an auxiliary control element is used, is a micro-lever. It acts simply: raising the lever opens the terminal, lowering it closes, clamping the conductor

The second variety usually involves an additional action with a screwdriver or similar tool. The screwdriver blade is inserted into an additional groove, usually located above the conductor entry groove, and light pressure is applied. Holding the screwdriver in this position, insert the wire end into the input hole until it stops.

Approximately in the same way, self-clamping push-in terminal blocks work, where the use of a screwdriver is not required. In this embodiment, the end of the conductor is simply inserted into the input window with some pressure until it stops. Usually this type of terminal is intended for single-core copper wires.

The design of the terminal block is self-clamping action, where the use of a screwdriver or similar tool is necessary. For the operation of the tool on such structures, a special groove is made

The noted two varieties are supplemented by a mass of subspecies, to some extent, modernized terminals.

A vivid example in this regard is demonstrated by the products of the well-known German company Wago. Connectors which are reliable, simple and easy to use. It is not surprising that most electricians choose these terminals. Get to know them closer.

German manufacturer Wago offers an extensive range self-locking terminalsamong which, in terms of subspecies, the following stand out:

Wago products are divided into series for ease of selection and configuration. Consider what serial modifications of self-clamping terminals exist.

Products in this series represent a lever-type construction. As a rule, these are painted wire terminals bright orange color, which allows you to quickly detect the connection object in conditions of mass wiring.

The product of the German company Wago, indicated in the catalog as 222 series. Lever type design, convenient for use when installing networks of relatively low power

Despite its specific purpose, the 222 series is just as well used for connecting single-core conductors. The rated operating voltage is limited by the parameter 380 volts at a maximum permissible current of 32A.

222 Series self-clamping terminal blocks are used to create connections inside junction boxes.At the household level, they are often used in the installation of lighting networks.

Given the micro-performance of this series of products, the rated voltage for the connection is allowed no higher than 100 volts at a rated current of 6A. The manufacturer claims the use of this type wire clamps only for solid wire. Conductors on both copper and aluminum are supported.

The design of the 243 series is another product from the assortment of the German manufacturer. Compact miniature housing makes it easy to use terminal blocks in hard-to-reach places

This is one of the subspecies of the self-locking terminal blocks, where the use of auxiliary levers is not provided.

The standard version of the 243 series terminal block is a rectangular module for placing four conductors inside four contact holes. Products in this series are usually painted in dark gray tones. They are used in the installation of video surveillance systems and in the assembly of other systems and networks where miniature connectors are required.

2273 or Compact is a kind of self-clamping specialized terminal blocks, that is, designed for use in the construction of a lighting network circuit. True, the manufacturer does not make severe restrictions. As the documentation indicates - it is allowed to work with conductors with a size of 0.5-2.5 mm2 by section.

A design variant of the self-clamping terminal block manufactured by Wago as a product of the 2273 series. This type differs primarily in the specific application recommended by the manufacturer.

The peculiarity of this series is the presence of products containing paste and not containing inside. As a rule, a special conductive paste is used on the installation of aluminum wires in order to create optimal conditions against the appearance of metal oxides on clamped conductors and terminal blocks themselves.

The main purpose of this series of terminal blocks is to work with conductors on a copper base (single-core / multi-core) of the 3rd class of flexibility.

The insertion of veins with a section of 1-6 mm is allowed2 depending on the configuration of the structure for a particular section. Terminals belong to the category of vibration-resistant products. Operating current 25-40A.

The design is almost similar to the previous one, with the exception of the technical feature. The peculiarity lies in the fact that this design is more powerful, allows you to work with a higher current load

The body of such Wago products is made of transparent insulating material, which allows you to control the depth of penetration of the core into the contact groove. Also on the case there is a "control" contact - points where it is possible to connect probes of measuring instruments.

This series provides connection of single-core and multi-core wires. In this case, up to 4 wires of both types with a diameter of not more than 4 mm can be connected to one terminal. The 862 series terminals are designed for use with voltages up to 500 volts.

It is enough light pressure on the peculiar control element of the terminal block - the foot, to insert the working conductor into the groove with the same ease. The release of the button foot, respectively, is accompanied by a wire clamp

Product uniqueness - there is no need to use an electric tool when making a connection. The design has a special button - a fixing foot, thanks to which it is easy and simple to connect / disconnect the conductor manually or with a screwdriver.

The design also differs by the presence of a fixing leg for attaching this connector.

The main rule of a potential buyer of self-locking terminal blocks, perhaps, is to highlight the mandatory verification of goods for authenticity. On the commercial market there is a mass of fake goods marked with a German brand - manufacturer Wago warns about this.

The cost of such products is reduced, which naturally attracts the buyer. However, this kind of savings can turn into troubles when operating the assembled circuits.

Meanwhile, without unnecessary warnings, it should be obvious that a forged product is a significant decrease in quality. How to choose the right wire connectorswithout fear of getting a fake? In principle, everything is quite simple. You only need to be more careful when choosing self-clamping terminals for installation.

The branded product traditionally has the Wago logo, printed in clear print, usually on the top or side of the case. Also, the main parameters are applied on the side - voltage and current.

This is what a branded product released under the Wago brand looks like. Counterfeit terminal blocks, as a rule, do not contain such a signet, or contain partially, applied with low quality

The color of the insulating material of the branded products is monotonous clear color. On the back / side of the terminal block is a mini-briefing of the connection.

Compared to Chinese counterfeit goods, terminal blocks, as a rule, have none of the above differences. In addition, the fake immediately differs in the diffuse color of the insulator, often in different colors.

Of course, the main points of choice are the purely technical parameters of the self-clamping terminal blocks. In particular, working voltage and allowable conductive current.

If the mounted circuits are designed for operating voltages that exceed the capabilities of the terminal blocks, respectively, the application becomes inappropriate and, moreover, dangerous.

You will learn about what color the connected wires are marked with next article, the contents of which we advise you to read.

The video below demonstrates a comparative analysis of branded terminal blocks with products that are completely fake and quite widely presented on the market.

The moment is considered - how to distinguish a branded self-clamping terminal from a fake:

Self-locking devices with which an electrical connection is arranged are convenient and practical. But with all the advantages of such accessories, their use is somewhat limited by technical and operational parameters.

But the development of such devices is actively continuing. It is not surprising if in the near future there will appear a kind of universal terminals for working in different conditions.

Tell us about how to repair or upgrade the power grid using clamp connectors. Share the technological nuances that beginner electricians should use. Please leave comments in the block below, post photos and ask questions about the topic of the article. 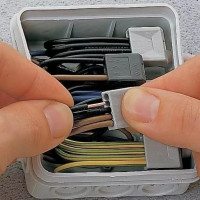 Terminals for connecting wires: which terminal blocks are better and how to work with them
3 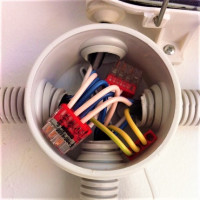 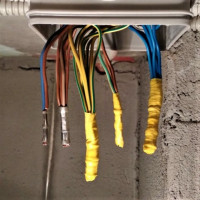 How to connect wires without soldering: the best ways and their features + installation recommendations
5 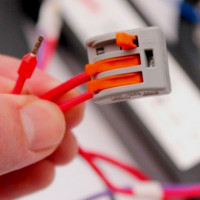 Wire connectors: the best types of connectors + what to look at when choosing a connector
3 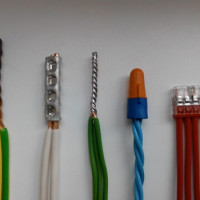 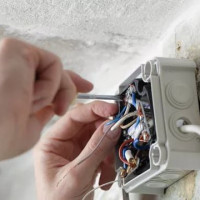 Replacement of a geyser in an apartment: replacement paperwork + basic norms and requirements Water heaters and boilers
1